Posted on December 30, 2013 by vacreepinoutdoors 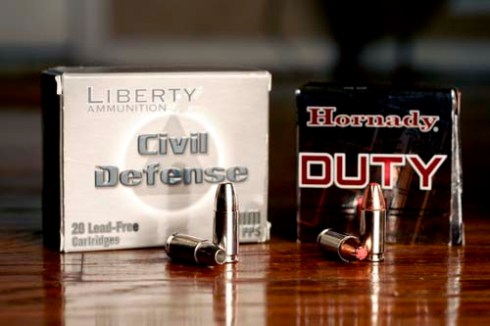 With the event of banning lead, I figured some examination of the lead-free replacements might be a good idea. I am certainly not a trained expert in the field of ammo testing, but figured some understanding could be obtained by putting a few rounds down range. The test was firing a few rounds at 5 gallon buckets of water and see what happens. it would be nice to repeat the test using modeling clay, but I don’t exactly have 80 gallons of clay laying around.

The most obvious difference between the 2 rounds the weight of the projectile. Using the 9mm rounds as an example, the lead-free weighs in at 50 grains where the lead is 135 grains. To say the lighter bullet cant deliver the punch as the heavier round is a little misleading. Where the rubber meets the road is measured in kinetic energy. Kinetic energy, in short gives the punch. In this case how hard the projectile hits the target. Yes the lighter round would seem to be less effective here, but Kinetic energy is also affected by velocity.  There are kinetic energy calculators on line. Being a bow hunter has made me aware of the importance of kinetic energy required to ethically take game. Here is a link I used for this comparison. http://www.eastonarchery.com/store/kinetic_calculator

Inputting the mass and velocity will give the kinetic energy produced. The Liberty ammunition rounds state 50 grains at 2000 fps, which comes out to 444 foot pounds. The lead rounds by hornady are 135 grains at 1015 fps giving about 309 foot pounds. These are at the muzzle. So the lead-free rounds actually have almost 140 fp advantage over the conventional lead. I would go into energy loss down range but with a handgun, most conflicts are at 15 feet or less. So its not really worth investigating unless you plan to shoot them with a carbine. Yes, there are some on the market that use handgun rounds.

The most notable difference with shooting 5 gallon buckets of water was that the lead rounds always passed through where as the lead-free did not. A complete pass-through or not passing through has its own debate. It kind of centers around 2 aspects. One being the effect of hydrostatic shock, or creating a cavity that causes more damage. The other is that if the projectile doesn’t pass through, ALL the energy is dumped into the target. My own personal take on the subject is I don’t want to be shot by anything. LOL I’m a very brass tacks and facts kind of person, so arguing the minutiae isn’t my thing. Either way, it would be a bad day.
A link to the video is posted below to the youtube video. Please check it out, like and subscribe.
Thanks

This entry was posted in VaCreepingOutdoors. Bookmark the permalink.