Posted on February 13, 2014 by vacreepinoutdoors 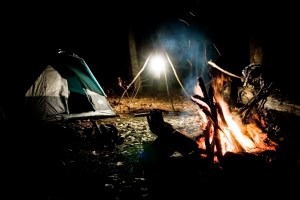 I like to test my gear in the back yard, but what good is having the equipment just to pack it away and never use it. It is easy enough to be a fair weather outdoorsman and wait for perfect weather. Having lived in Newfoundland Canada for 2 years, the thing I learned was, If you wait for the perfect day, you’ll never get out. It was always cold, wet, snowy, windy, and foggy. It would reach 70 degrees two days out of the year. I had my hunting license checked a couple years ago, the game warden kinda busted on me about a bit of rust on my shotgun. He just didn’t know where all that gun had been. LOL I loved the snow days. That just meant another day in the woods chasing grouse, rabbit and ptarmigan. Or drilling a hole through 3 feet of ice to make an “attempt” to catch a fish. So among the rambling, I went camping.

The conditions were cold. Day time high was somewhere around 35…ish.. Over night, 25 or so. I wasn’t diligent about checking my misery meter. More commonly known as a thermometer. Some times its just better not knowing your suppose to be miserable. I do know it was 27 that evening and 27 in the morning when I was up and about. Out there it didn’t feel so cold. But its been 27 degrees this week and it is COLD when I leave the house for work. So much for the thought of being climatised or a little tougher for the experience. At home cold is still cold. It’s probably more attributed to the fact that I was better prepared for the cold while out camping. Who wears thermals and multiple layers just to run to and from their car?

I was accompanied by a “TOTAL NEWBIE” to the outdoors. survivingshtfmom. It’s always best to introduce newcomers in more positive, comfortable conditions. First experiences should encourage newcomers to go again. But if you can survive sub freezing weather in February, the rest has to be a piece of cake. It’s always good to get out with people that have less experience. It gives me an idea what people don’t know, and things I just assume everybody knows. For this trip it was fire building. There’s many designs dependent on the purpose to build a fire, but the basics are still the same. I went over various ways to cut, gather and process wood. The actual building of the fire was placed on her. She had everything needed but still failed. Not to discredit her, but as Thomas Edison once said… “I have not failed. I’ve just found 10,000 ways that won’t work.” Knowledge is ever growing and building on itself. There is no reason to reinvent the wheel. So after that failure, I showed her how to build a fire in those conditions so she wont have to fail another 9,999 ways. It was a bit of an eye opener to me about what some people may not know.

For dinner, MRE’s. Being ex-NAVY, I don’t have the greatest experience with them. Shhhhhhhh.. 😉 I don’t remember the heat pack in the last one I saw during my time in service. Being a fair option for the outdoors, we ate them for dinner. Finding out during sub-freezing weather, the heat packs may not bring the meal up to tempature. I ended up placing my packets in the fire ring to heat them up. Some times you have to be resourceful. Still in keeping with the military, adapt, improvise, and overcome. Yea, it’s just a meal, but a warm meal can hit the spot.

I still used my 3 season tent. Meaning it has lots of bug screen/ netting for the top. I really should consider a 4 season tent. For the work around, I steaked out my fly so there was little room for air flow between the fly and the tent. In addition I put a mylar blanket over the fly and taped it down. That was kind of an experiment, but it did keep the tent around 40 degrees, so that was a success in my book.

For the equipment, a double mantle propane lantern, a 2 man Quest tent, 3 sleeping bags rated for 10 degrees. one butterflied for the ground pad and the other 2 were slept in. MRE’s for dinner and remains for breakfast. Other than that was just items from my pack that I carry when I’m out in the wilds. My pack does include a shelter and sleeping solution for a last ditch effort. I’ll probably cover that later.

Over all it was comfortable for me an a bit chilly for my camping companion. My experience level is decades greater, but there’s only one way to learn. Get out and do it! Weather in your back yard or some other controlled and supervised condition. Granted interest levels vary. Just seek the knowledge and experience level suited to you interest. Get out have some fun, put some experience under your belt, and stay safe.